Up until yesterday, we thought this race was going to be one rainy, wet mess. Then a hint of promise: Weather Underground forecast rain to stop right about race time and pick up again just after my anticipated finish time with some percent chance of rain during.  Come this morning, the forecast was clouds and fog, and about 60-degrees. Essentially perfect running weather.

Which was good, because I was going to need something close to perfect conditions: I’m pretty much fully recovered from my piriformis strain, but (damn, there’s always a ‘but’) since I’m an idiot and kept trying to push through, I developed a bit of a shin splint, which is painful and has pretty much kept me from running very much at any competitive pace – and yes, I know, I wrote about a 5k I recently ran and won my age group…but take a look at that pace: not exactly world beating – and not pairing up with my previous paces. My conditioning has suffered over the past several (6?) weeks, but I have been mindful to avoid blowing up like a tick weight wise like I did in December when I was last injured. I’ve been going to fitness bootcamp (although, I do have to admit to feeling kind of low and letting that keep me from going more) and being mindful of my calories. I’ve actually lost weight over the last 6 weeks or so, topping out at under 180 for the first time in quite some time. That mindfulness paid off today, to be sure.

Then there was the pre-race issues. I just couldn’t put myself together. The car wouldn’t start. I couldn’t get into the trunk to get the jumper cables because…the car was dead so the fob nor the button inside would release.  Because I took so much time messing around with that stuff, I didn’t get anything to eat. Just a potential disaster looming.  NOTHING was going my way.

The Horseneck course is pretty flat and under the conditions today presented I would normally have looked at it as an opportunity to crush my New Bedford Half time. My buddy Duke, about whom I’ve written previously,  on top of being a captain of industry also happens to be a certified personal trainer (who knew?) and he taped me up pretty good. That bought me more than a few pain-free/reduced miles – without which this would likely have been an ugly crying hot mess. My goal today was really to be competitive with my Clearwater Half time from January – my first distance race after December – but definitely under 2-hours. The layoffs were similar in scope and I wasn’t feeling optimistic. 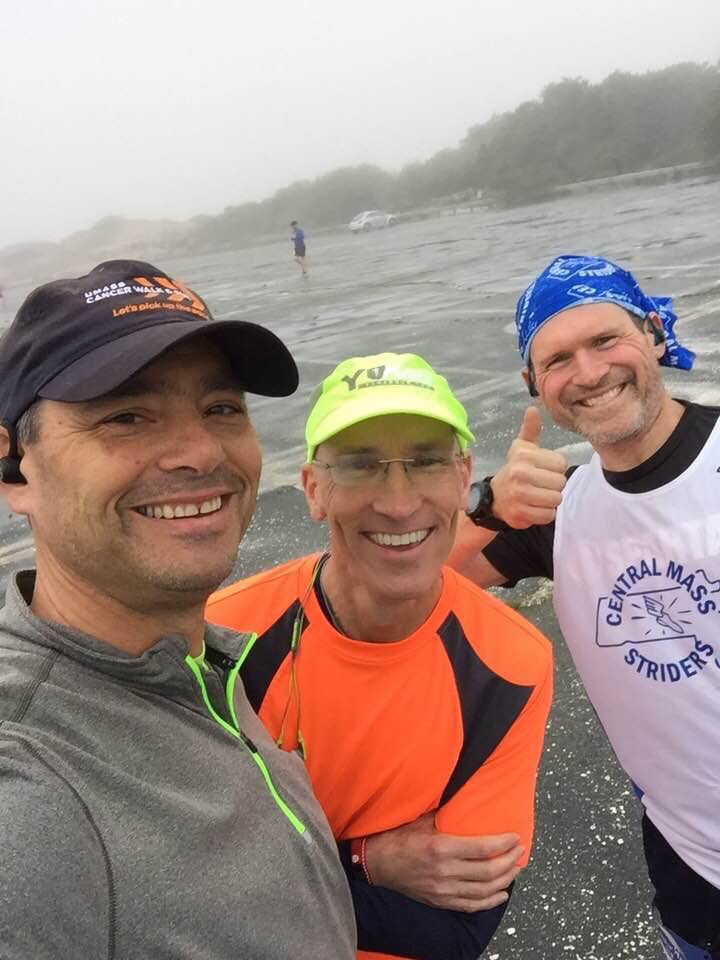 About 2 miles in, I was questioning whether I’d be able to pull this off – whether it was a lack of proper stretching, or conditioning or what – I was letting doubt get to me. My internal dialogue was becoming poisonous to my race, so I had to shut it off and focus on other things: the scenery, the pace, distance to go, my music.

I could feel the tightness in my quads – damn conditioning – and knew I couldn’t stop so I had to keep running. It was about half way through that I was becoming quite ornery about it, and that was manifesting itself in fighting with the motorists trying to squeeze by runners along the ancient roads of Westport: by and large there was plenty of room for motorists to pull to the side of the road and/or stop to allow cars in the opposite direction to pass by, and yet these morons kept squeezing runners over and the like. One guy actually got into the race course, and started honking at a woman who was probably 100-feet ahead of me. I burned quite a bit of fuel trying to catch up to let this guy know exactly what I thought about that – he was literally so close to her that had she stopped he would have hit her. Sadly, however, the cluster broke up and he continued on his way: I was pleased that she either hadn’t heard him (doubtful) or she ignored him and kept running her race.  I was secretly hoping someone would try that nonsense with me.  My middle finger did get a bit of a workout – I’m not sure I’m proud of that, but sometimes keeping fueled means keeping fueled by anger.

Between mile 8 and 9 I was busy trying to figure out what I had to do to finish sub-2 hours; this is a sure sign that I was allowing that toxic self talk back into my head – giving myself an out: “…okay, so if I average a 10:00/min pace…” Allowing myself wiggle room for failing to perform. I had done well enough to that point that I had some cushioning to meet my goal, but it would be close, and this time that toxicity was outweighed by stubbornness.

As my watch clicked over to 12-miles, I knew I had enough time to beat 2-hours, but then the question was by how much, and would I get my Clearwater time? I kept pushing and actually had my best pace since that second mile. Those last few miles were difficult for me as well because of the headwind, so as we made the turn into the State Reservation, with a little less than a half mile to go it was a god send. Flat, generally wind free, just enough to push myself over the finish in a little less than 1:58:00.  Didn’t beat Clearwater, which was a bit of a personal defeat because I wasn’t happy with that time in January and after the voyage this year I am certainly disappointed, but it was a personal victory in keeping it under that 2:00 mark.

In my very first half – the Black Goose Half Marathon in October 2016 – I finished in 2:00:48 and I’ve been pissed at myself since that I couldn’t find 48-seconds somewhere over 13.1-miles.  From that low to my most recent half where I hit a personal best, I had really hoped when I registered that I’d come close to 1:50:00 or even better my New Bedford Half time.  It turns out I most closely approximated my Cambridge Half Time.  Disappointing, but not heart breaking.

I may have an opportunity to run a half in London next week  (or perhaps some shorter derivation), but unless that happens I’ll have another shot at an improved time next month – hopefully without the issues that plagued me today.  Onward and upward.

The course had a total gain of maybe 30′ (my watch says 358′ gain, 322′ loss…pretty significantly because it’s essentially a loop and I’m pretty sure there’s not 30′ of elevation between the finish and start). Remarkably I had a 176 spm cadence, so it would appear it was mostly in my head. My stride was shorter than usual, so I know I could have been faster, basically “remembering” what an 8:20 m/m pace feels like – I could feel myself moving easily between say 9:15/20 and 8:40, but I was letting my head too much control.  I’ll be working on that one.